Sculptor and professor Terho Sakki's abstract works are a common sight in Finland and abroad. In Helsinki his works include the statue of a running Lasse Viren. The memorial to A.I. Virtanen was commissioned by Valio directly from the artist. Artturi Ilmari Virtanen (January 15, 1895-November 11, 1973) founded biochemical research in Finland. He was the professor of biochemistry at both the Helsinki University of Technology and the University of Helsinki. His work at the Valio laboratory and as the director of the Biochemical research institution in 1921-1970 were, however, most formative of his career. His extensive research brought him a Nobel Prize in chemistry in 1945. Virtanen's most famous invention is probably the method of feed storage named after him. 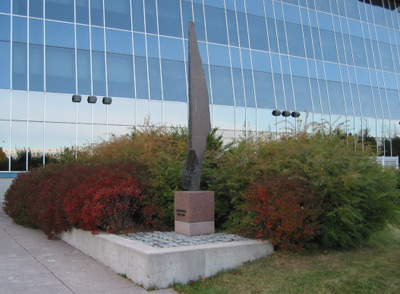 Terho Sakki: Memorial to A.I. Virtanen, 1995. You may not use this photo for commercial purposes. © Photo: Helsinki Art Museum