Uno Staudinger, the owner of Villa Ensi, bought the pieces The Joy of Motherhood (1911) and Goodbye, placed at the entrance to the Villa, according to the family history from an exhibition in Norway, which is why the sculptor is believed to have been Norwegian.

In fact, however, the sculptor, Harald Sörensen-Ringi, was Swedish. Sörensen-Ringi was born in Skön in Sweden's West Norrland in 1872 and died in 1912 in Stockholm. He studied under Hasselberg in Sweden, and in Paris. Sörensen-Ringi was a master of beautiful form and poetic atmosphere. His oeuvre comprises numerous portraits and a statue of king Gustav II Adolf, located in Sundsvall, Sweden. The Villa Ensi pieces are prime examples of Sörensen-Ringi's talent. Sörensen-Ringi's contacts with Norway probably derived from the founder he used. He participated in a joint exhibition in Norway, from which Norway's National Gallery purchased a piece named Natten (Night). The Villa Ensi works were probably purchased from the same exhibition. 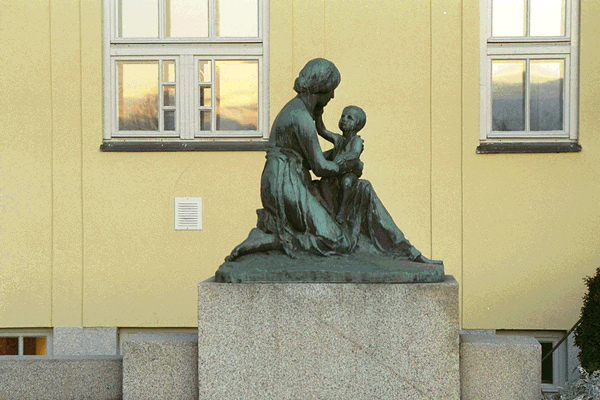 Harald Sörensen-Ringi: The Joy of Motherhood / La joie de la Maternite, 1912. You may not use this photo for commercial purposes. © Photo: Helsinki Art Museum