Alexander I and The Porvoo diet 1809

The House of the Estates, designed by Gustaf Nyström, was completed in 1890 to serve as a place of assembly for the three estates below the rank of nobility. On the Estates' initiative a competition was arranged to find a sculptor to carry out the tympanum group. The competition was won by young Emil Wikström's entry 'The development of the Finnish people through battle and work to the first Diet in 1809'.

The bronze group is 18.6 metres long and its greatest height is 3.12 metres, and it comprises 26 larger-than-life figures. In the centre, the figures depict Czar Alexander I, and marshal Robert Wilhelm de Geer, spokesman of the burghers Trap, archbishop Jacob Tengström and the spokesman of the peasants Klockars as representatives of the Estates. The words "Leges et instituta Fenniae solemniter confirmatae" indicate the purpose of the event depicted in the tympanum - the confirmation of Finnish law and institutions.

The central group is separated from the other groups by female figures representing law and faith. The group on the right-hand side depicts the development of the nation through battle with the pieces War (a wounded soldier), Reconciliation, Towards a better future (old man and a boy) and God Bless the Land of the Fathers (a woman raising a cross). On the left, the development through work is depicted by the Kantele player, First teaching, Agriculture, Trade, Industry, Science and Art.

The artist's work on this monumental piece was hindered by a fire at his studio in Visavuori in 1896. In addition to the studio itself, the original design and the plaster casts of the individual pieces, three years of Wikström's work, were consumed. As a result the artist moved to Paris, continuing the work in 1897-1902. The group was finally mounted in 1903. The unveiling was a rather simple ceremony as the delicate political situation prevented a more grandiose unveiling of this patriotic work.

Alexander I and The Porvoo diet 1809 – Service Map 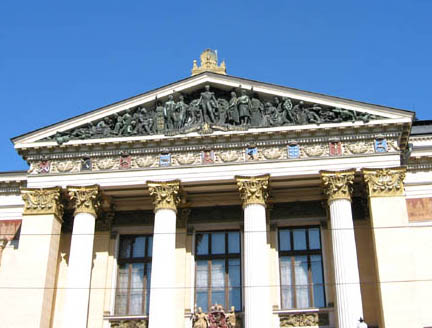 Emil Wikström: Alexander I and The Porvoo diet 1809, 1903. You may not use this photo for commercial purposes. © Photo: Helsinki Art Museum