Aleksis Kivi (1834-1872) is Finland's national author. Wäinö Aaltonen's (1894-1966) bronze memorial to him was unveiled on October 10, 1939. The unveiling was preceded by a two-stage competition in 1928-30, the first of which was won by Carl Wilhelms and the second by Aukusti Veuro. However, the memorial was finally commissioned from Wäinö Aaltonen. In 1932, the memorial committee commissioned a plaster draft which was finished in 1934 and cast in bronze in 1939.

The memorial shows a melancholic and contemplative, even introverted Aleksis Kivi. It represents a composed, realistic Classicism, the established trend in Finnish art in the 1920s and 1930s, partly defined by the works of Aaltonen himself. Aaltonen borrowed Aleksis Kivi's features from a portrait A. E. Forsell made of the dead author. Aaltonen had already worked on the features while preparing his entry in a competition for an Aleksis Kivi memorial arranged in Tampere in 1926. Aaltonen modelled Kivi's sitting figure on a painting of a sitting woman the sculptor had made earlier in 1926.

The author is sitting in a chair under which there are three reliefs inspired by Kivi's literary works "Sydämeni laulu", "Keinu" and "Seitsemän veljestä pakenee Impivaarasta" ("My Heart Sings", "Swing" and "The Seven Brothers flee Impivaara"). 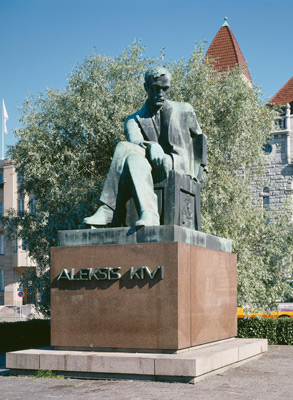 Wäinö Aaltonen: Aleksis Kivi Memorial, 1939. You may not use this photo for commercial purposes. © Photo: Helsinki Art Museum / Yehia Eweis