In Greek mythology, the Danaides are the fifty daughters of Danaus, the king of Argos. After falling into a dispute with his brother Aigyptos and fleeing Egypt, Danaus refused to marry his daughters to Aigyptos' fifty sons. Finally, he agreed, however, instructing his daughters to kill their husbands during the wedding night. One of the daughters, Hypermnestra, neglected the orders and her husband killed Danaus in revenge of his slain brothers. The obedient daughters were also punished - they were condemned to pour water perpetually into a jar with a hole in the bottom in Hades.

The bronze sculpture was finished in 1893 and was originally located in the park of the Sairaala Ensi hospital (now Villa Ensi) thanks to Uno Staudinger, a businessman. Now it is located in the district of Töölö outside the Childrens' Clinic. 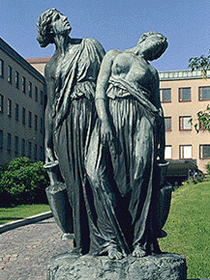 Walter Runeberg: The Danaides. 1893. You may not use this photo for commercial purposes. © Photo: Helsinki Art Museum