Elämän nektaria / The Nectar of Life

Having first studied architecture Gunnar Finne enrolled in the Institute of Industrial Arts from where he graduated as a furniture designer. He then travelled to Vienna, the great city of art at the turn of the century, where he was much influenced by, for example, the renowned architect Joseph Hoffmann. Hoffmann's influence is apparent in the lightness and subtlety of Finne's work which was uncommon among Finnish sculptors of the period who applied a slightly rugged National Romantic style. The work is a relief consisting of five parts and mounted on the facade of the Alko Inc. headquarters designed by Väinö Vähäkallio. Despite being stylized, Finne's means of expression are clearly classical. While his intention was not to produce realistic figures but to stress symbolism and the context created by the surroundings, he never abandoned clear human or animal form. 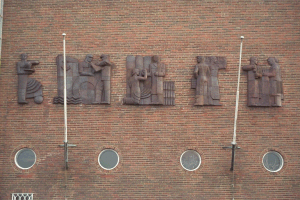 Gunnar Finne: The Nectar of Life, 1938. You may not use this photo for commercial purposes. © Photo: Helsinki Art Museum