The Curtain' marks a turning point in Finnish memorial sculpture - it is the first abstract memorial of a person to be actually realized. Raimo Utriainen's (1927-1994) entry won the general competition for the memorial in 1961 and the following invitational in 1962. The 9-metre high bronze memorial, set on a red granite pedestal, was unveiled in 1972.

Ida Aalberg (1857-1915) was a famed star of the Suomalainen teatteri theatre and was considered the best actress in the Nordic countries in her time. Visually, Utriainen's work is based on the heavy, yet dynamic movement of a theatre curtain. It derives its power from the interplay of light, space and form. 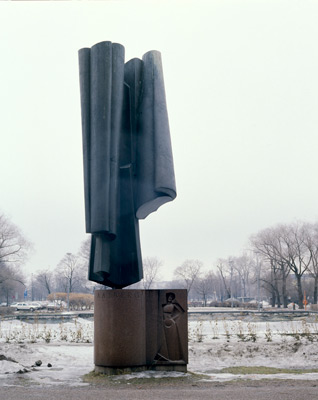 Raimo Utriainen: The Curtain (Memorial to actress Ida Aalberg), 1972. You may not use this photo for commercial purposes. © Photo: Helsinki Art Museum