Robert Stigell (1852-1907) made a plaster sculpture on the shipwreck theme already in the beginning of the 1890s. In 1893 he offered a bronze cast of it to the City of Helsinki to be used as a public monument. In 1897, the City signed an agreement with the sculptor, and Stigell finalized the work, over 4 metres in height, in Paris between 1897-1898. The sculpture was also cast in Paris.

The sculpture depicts a shipwrecked family. The father, the central figure in the group, holds a small child in his arms and is calling for help. He is waving a scarf and looking towards their rescuers. Another child, a small boy, is stuck in what remains of the ship. The mother has collapsed and is lying on the raft. The work does not depict a particular shipwreck nor is it historical; Stigell was merely interested in exploring the sculptural dynamics of the subject.

'The Shipwrecked' has been offered various symbolic meanings, none of which originate with the artist himself. Leo Mechelin, the speaker at the unveiling on November 18, 1898, made a reference to the difficult political conditions of the years of Russian suppression and to a promising future for Finland.

The sculpture faces West which has also been interpreted symbolically. The location of the sculpture was debated still in 1898, at least in the newspapers. According to one suggestion, the work should be placed near the Kappeli restaurant in the Esplanadi park and complemented with appropriate floral arrangements. A committee appointed by the City finally decided to place it on the square on Tähtitorninmäki, as Stigell himself had requested.

'The Shipwrecked' is the first outdoor work of sculpture in Helsinki which was not a memorial for a particular individual or event. It is 4.5 metres high, reaching 6 metres with its granite pedestal. It was cast in bronze in Paris by E. Gruet and the pedestal was made by Oy Granit in Hanko, Finland. 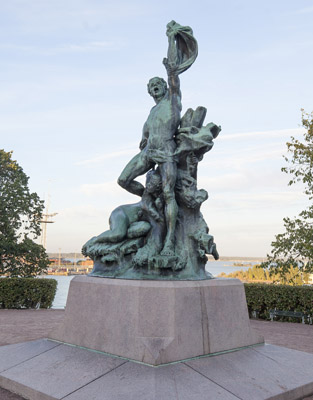 Robert Stigell: The Shipwrecked, 1898. You may not use this photo for commercial purposes. © Photo: Helsinki Art Museum / Maija Toivanen