Jussi Mäntynen made his debute as a sculptor of wild animals in 1923 at the Nordic hunting exhibition in Helsinki where he presented a nearly four-metre high plaster model of a male elk. The piece was greatly admired and it was proposed that it would be cast in bronze and erected in the Kaivopuisto park. The work was not, however, cast until a couple of years later. In 1928 it was placed in Viipuri's Torkkeli park. Mäntynen donated the plaster model to the City of Helsinki. Three additional casts were made, placed in the Erkko park in Lahti (1955), Kupittaa park in Turku (1969) and the front of the Zoological Museum in Helsinki. Mäntynen later revealed that `The Elk' was inspired by the Demon Elk in Kalevala. Spending much time outdoors, Mäntynen knew animals extremely well. He had also worked as a taxidermist and was familiar with international animal sculpture. 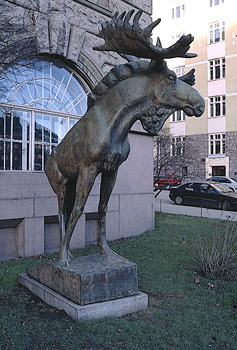 Jussi Mäntynen: The Elk, 1923. You may not use this photo for commercial purposes. © Photo: Helsinki Art Museum