Within the series of Kalevala sculptures of the Old Student Union Building Stigell's pieces Väinämöinen and Ilmarinen stand midway in the development from Ekman's Song of Wäinämöinen to Akseli Gallen-Kallela's Kullervo Sets Off for a Battle. They are proof of Stigell's confident mastery of shape and material. He depicts Väinämöinen playing the kantele in an upright position and Ilmarinen forging a plough, giving both a dynamic upward movement. As horizontal elements the kantele and the plough underline the symmetry of the two figures. The pieces symbolize the duties of youth in the material and spiritual building of a society. The works are cast in cement.

Design work for the Old Student Union was initiated in 1858 and the building was completed in 1870. In addition to sculptures, the facade includes a frieze by Walter Runeberg. The cement-cast frieze follows classical ideals and emphasizes the Neo-classical style of the building. The text "SPEI SUAE - PATRIA DEDIT" (The land of the fathers gave to its youth) is also on the facade.

Sculptures don't belong to the collections of the Helsinki Art Museum. 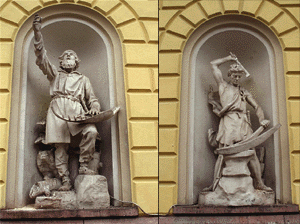 Robert Stigell: Ilmarinen and Väinämöinen, 1888. You may not use this photo for commercial purposes. © Photo: Helsinki Art Museum