Bold experiment with different materials and methods are common in Laila Pullinen's (1933-2015) art. For instance, she was one of the first Finnish sculptors to combine bronze and stone. Pullinen's dramatic methods of the 1960s, including explosives and submachine guns, have not obscured her works' strong and meaningful poetry. Its differing surfaces make `The Daughter of the Baltic' very dynamic. As its arching outer surface progresses inwards its smoothness meets unpredictable and coarse folds. Although the upper part of the sculpture is reminiscent of the headgear worn by Ancient Egypt's rulers, the form can only be recognized on the side where the surface is smooth. The interior of the twisted sculpture betrays the outer tranquillity of the piece; it is like violently boiling magma in a volcano.

The Daughter of the Baltic' is a memorial to the author Maila Talvio (1871-1951), a prominent figure in Finland's cultural life, and the work is named after Talvio's historical novel on the Helsinki. The memorial was erected in the former location of professor J.J. Mikkola's and Maila Talvio's home.

Today, the memorial includes an earth relief named `The Baltic Sea' based on the stone foundations of the torn-down main building. Together with the sculpture, the undulating earthen ridges designed by Laila Pullinen form a work of art in which the twisting and upright sculpture enters into a dialogue with the grass covered ridges. The bronze memorial was unveiled in 1971. The relief `The Baltic Sea' was completed in 1992. The work of art belongs to the collection of HAM Helsinki Art Museum. 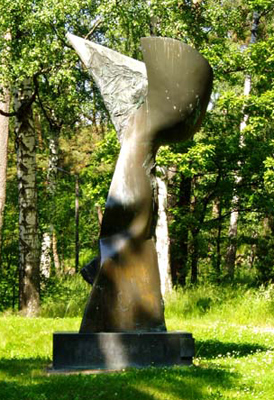 Laila Pullinen: The Daughter of the Baltic (Maila Talvio Memorial), 1971. You may not use this photo for commercial purposes. © Photo: Helsinki Art Museum