Already during his lifetime, the Finnish national poet Johan Ludvig Runeberg (1804-77) was subject to a personal cult and glorification by literary critics. This left the younger generations of poets in his shadow, raising voices of criticism. Runeberg's influence and his adoration was not only national, but reached to the other Nordic countries such as Russia, Germany, France and the UK, too.

A year after Runeberg's death a committee appointed by the Estates, with Zacharias Topelius as secretary, commissioned a memorial from the poet's son Walter Runeberg (1838-1920), who was working in Paris at the time. The sculptor's draft was approved in 1882 and cast twice in bronze in Paris. The pedestal's Maiden of Finland, wrapped in a bearskin, was completed in 1883. In her left hand, she is holding a table with the words of the Finnish national anthem in Swedish. In her right hand she has a laurel wreath, and a pile of books lies by her feet.

The granite pedestal also contains an inscription and the year 1885. The poet Runeberg is depicted on the monument the age of 55, typically dressed in a priest's coat (like the one he wore while teaching at the Porvoo Gymnasium). His right arm is resting on his chest with the thumb stuck underneath the coat, as if he were about to begin a speech. The memorial contains no hint of the identity of the person depicted by it - it was considered self-evident. Runeberg's statue was unveiled on May 6, 1885, eight years after the poet's death.

The statue talks to you: https://patsaspuhuu.fi/runeberg/?lang=en 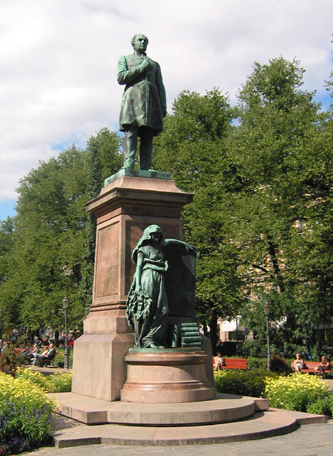 Walter Runeberg: Johan Ludvig Runeberg's memorial, 1885. You may not use this photo for commercial purposes. © Photo: Helsinki Art Museum