J.V. S nellman (1806-1881) was a philosopher, statesman, author and newspaperman. He designed a comprehensive plan for the development of the Finnish nation and of the state to be founded on it. He stressed the value of the Finnish language and the importance knowledge had in improving national self- awareness and action and as the precondition of a functioning state. He also finalized the monetary reform which gave Finland its own currency, the markka. Snellman's principal philosophical inspiration was Hegel, whose views he applied in his own works on government and philosophy. Snellman's memorial was commissioned from Emil Wikström (1864-1942). The funds were provided by a public collection.

Wikström designed a monumental and dignified sitting figure whose features were depicted in a realistic style. A plaster model was completed in 1915, but the as funds accumulated very slowly and a war was going on its casting was delayed. The work was finally unveiled in 1923. Architect Eliel Saarinen designed the statue's pedestal and surroundings. 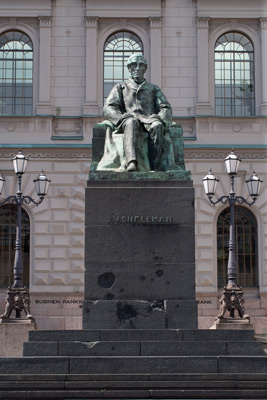 Emil Wikström: Johan Vilhelm Snellman, 1923. You may not use this photo for commercial purposes. © Photo: Helsinki Art Museum / Maija Toivanen