Juhani Aho, originally Johannes Brofeldt (1861-1921), was the first Finnish professional author. He had a decisive influence on the development of Finnish prose and played a central role in introducing the literary ideas and fashions of the late 19th century Europe to Finland. Aho was a central cultural figure in his time and active in, for instance, the Nuori Suomi circles. He was also an important journalist and translator.

The memorial to Juhani Aho was unveiled on the 100th anniversary of the author's birth in 1961. The memorial was proposed by the Juhani Aho Society, and the realistic portrait was commissioned from Aimo Tukiainen (1917-1996). Juhani Aho spent the last years of his life with his wife, the painter Venny Soldan-Brofeldt, living in the building in front of which the statue is located (Armfeltintie 6).

Aimo Tukianen also cast another copy of the statue, erected in Iisalmi in 1961. The statue is cast in bronze and it's height is 2,8 metres. The work of art belongs to the collection of HAM Helsinki Art Museum. 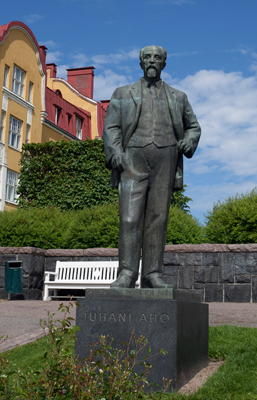 Aimo Tukiainen: Juhani Aho, 1961. You may not use this photo for commercial purposes. © Photo: Helsinki Art Museum / Maija Toivanen