During the turmoil of the Second World War, Finland surrendered eight Jewish refugees to the Germans, including a young family and a single father and his 10-year-old son. On November 6, 1942, the refugees were taken on the s/s Hohenhörn from Helsinki to Tallinn and eventually to the concentration camp in Auschwitz. Only the young father is known to have survived; the others perished in the camp. The Memorial to Jewish Refugees was unveiled in November 2000 near the location from where the Hohenhörn sailed.

The names of the refugees and an explanation of their fate have been inscribed onto the monument in Finnish, Swedish and Hebrew. The Finnish text was written by the author Arvo Salo and the Swedish text by Mikael Enckell:"Before you is the southern harbour from which on November 6, 1942, the Finnish authorities surrendered eight stateless Jewish refugees to the Gestapo, Tallinn and eventual obliteration".The stone has the following text in Swedish:"Även åt dem skapar jag helgdom och inom mina murar ett ärvfullt minnesmärke och namn" (Even unto them will I give in mine house and within my walls a place and a name (Isaiah 56-5)).

The memorial consists of a slab of light Ylämaa granite some two metres in length and one in height and of a bronze plaque resting against the slab. Raised hands begging for mercy are depicted in high relief on the plaque. On the other side of the slab there is a reflecting stainless steel plate. 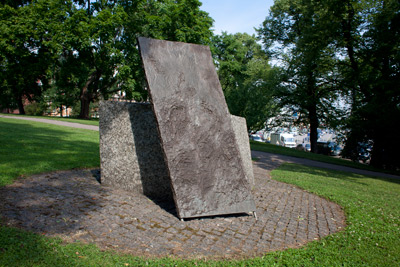 Memorial to Jewish Refugees - Hands Begging for Mercy, 2000. You may not use this photo for commercial purposes. © Photo: Helsinki Art Museum / Hanna Kukorelli