The twelve apostles on the four pediments of the Helsinki Cathedral are the work of German sculptors August Wredow (18041891) and Hermann Schievelbein (1817-1867). Wredow sculpted Andrew, Matthew, Jude, John, Philip and Bartholomew, while Schievelbein sculpted Paul, Jacob, Matthias, Peter, Simon and Thomas. The statues were cast by the S.P. Deravanne zinc foundry in 1845-1847, and placed on the pediments in 1849. They form one the world's largest uniform collections of zinc sculptures and are mentioned in most key articles on the production and uses of zinc.

Peter holds two keys which symbolize his right to forgive or not to forgive sins. He is the patron saint of locksmiths, confessors and fishermen. Thomas is the patron of architects, builders and surveyors, while Simon Zelotes, with a saw in his hand, is the patron of woodcutters, tanners and weavers. John holds a cup and a book, and is the patron of printers, book sellers, notaries and writers. Matthew's attributes are writing equipment, signifying his role as the patron saint of tax collectors, customs officials and bookkeepers. Bartholomew is the patron of craftsmen, including book binders, tanners, tailors and butchers. Reportedly flayed alive, he holds a knife as a symbolic portent of his tragic death. Paul's (Saul of Tarsus) attribute is a sword, and he is the patron of tent makers, theologians and the ecclesiastical press. James the Great (son of Zebedee), the patron saint of pilgrims, soldiers, horsemen and chemists, holds a leather staff adorned with the image of a shell. Jude son of Jacob (Thaddeus, Lebbeus or 'the child of my heart') holds a cudgel; he has not been chosen to be the patron of any profession. Andrew, Peter's brother, is the patron of fishermen. His attribute is an X-shaped St. Andrews cross. Matthias' attribute is an executioner's axe, and he is the protector of carpenters, butchers, smiths and confectioners. Philip, the patron of trinket sellers and fullers, holds a cross in his left hand and an open book in his left; the cross symbolizes his death and the book is a symbol of all twelve apostles, who were killed for defending God's written word. (from Kirkko ja kaupunki, pp. 1011, February 15, 1995, no. 7).

The Twelve Apostles don't belong to the collections of the Helsinki Art Museum. 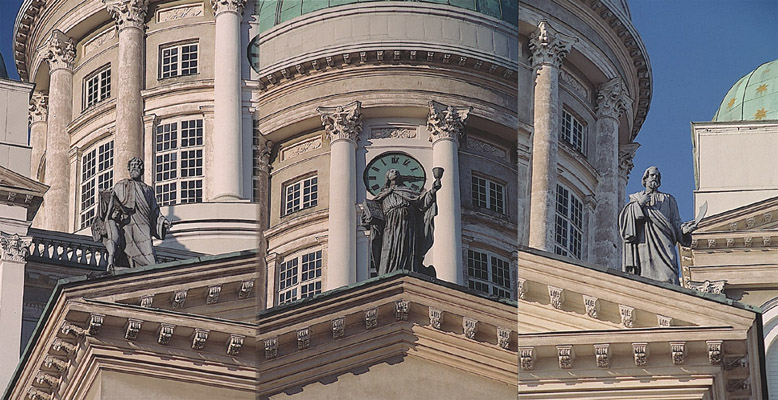 Hermann Schievelbein and August Wredow: The Twelve Apostles, 1849. You may not use this photo for commercial purposes. © Photo: Helsinki Art Museum