In 1915 a competition was arranged to find sculptures to improve Helsinki's cityscape. The competition had three series; the purpose was to place a sculpture at both ends of the Pitkäsilta bridge, and in Kaivopuisto and Eira parks. While Pitkäsilta remained without sculptures, the other two series were won by Viktor Jansson. His entries were never realized. Bertel Nilsson's (1887-1939) draft `The Fishing Bear', which came second in the series for Kaivopuisto park, was realized, however, and placed in the park in 1916. The Fishing Bear' is a playfully realistic drinking fountain in red granite. The work of art belongs to the collection of HAM Helsinki Art Museum. 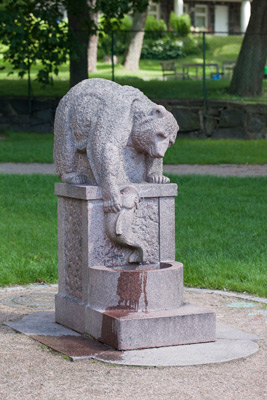 Fiskande björn: The Fishing Bear, 1916. You may not use this photo for commercial purposes. © Photo: Helsinki Art Museum / Maija Toivanen