'Life cut short' is a memorial to fallen soldiers. Its imagery is linked to Informalism which appeared in Finland in the 1960s. Informalism is often based on observations of nature but in an abstract or stylized manner. In informalist sculpture works are made as if they had emerged and grown freely in nature. The pedestal is often excluded, and the works have multiple components which involves the space between the components and gives it emphasis. This applies also to Aimo Tukiainen's (1917-1996) 'Life cut short'. The bronze elements rising from a terrace-like platform have been described as trees whose trunk and roots have been cut off. The work's components are like a garden within a park. The work is also known by the rather apt name 'Stunted growth'. 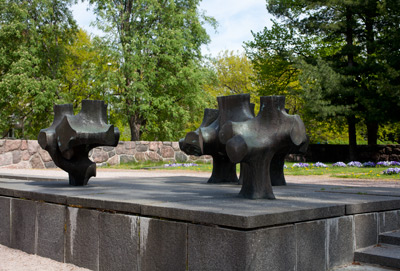