Keisarinnankivi / The Stone of The Empress

'The Stone of the Empress' is the oldest public memorial in Helsinki. It was erected in the Market Square to commemorate the Empress Alexandra's (the German-born wife of Nicholas I), first visit to Helsinki. She visited the City in 1833 with her husband, who came to inspect the construction of Helsinki's new centre. The memorial is an obelisk cut in red granite. A bronze globe is set on top of the obelisk, and the two-headed eagle of Russia.

The obelisk form, already a basic memorial type for glorifying sculptures depicting historical events and in memorial stones during Antiquity in Europe was adopted for 'The Stone of the Empress'. This work is typical of the early 19th century obelisks which followed the traditions of the Antique forms.

The Memorial is placed where Alexandra and Nicholas stepped ashore from the Ischora, the steamship that brought them to Helsinki. 'The Stone of the Empress' was unveiled on December 18, 1835 on Nicholas's nameday. Russian sailors removed the bronze globe and two-headed eagle on April 17, 1917. However, in 1971, they were returned. The work of art belongs to the collection of HAM Helsinki Art Museum.

Keisarinnankivi / The Stone of The Empress – Service Map 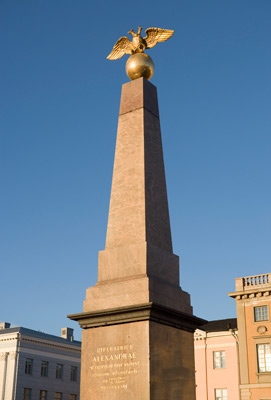 Carl Ludvig Engel: Keisarinnankivi / The Stone of The Empress, 1835. You may not use this photo for commercial purposes. © Photo: Helsinki Art Museum / Yehia Eweis