'Kide' (Finnish for "crystal") consists of nine glass cubes, which were originally erected in the nine European Cities of Culture of 2000, whence also the cubes' names: Avignon, Bergen, Bologna, Brussels, Helsinki, Krakow, Prague, Reykjavik and Santiago de Compostela. The dimensions of each crystal are approximately 2 x 4 x 3 metres, and they light up at dusk.

Each crystal - and city - has its own colour. The crystals were first erected in 1999, when they were linked to each other with images and sounds transmitted by GSM technology, symbolising the coming year of culture and also the connection between peoples and cultures. The work's artistic concept and design were by Peter Ch. Butter, Kari Leppänen and Dusan Jovanovic, who were awarded the Prize for Environmental Art 1999 for their work. At the end of the year, the crystals were gathered at the top of the steps of the Helsinki Cathedral to bring light to the dark northern winter.

Cubes that had been damaged in transport were repaired and the work in its entirety was erected on a breakwater in the Ruoholahti district in Helsinki, where it was officially opened on Helsinki Day 12 June 2002. From the site in Ruoholahti the work was clearly visible from the sea and from the Lauttasaari bridge, especially at dusk when the crystals light up. The art piece was temporary and has been removed 2015. 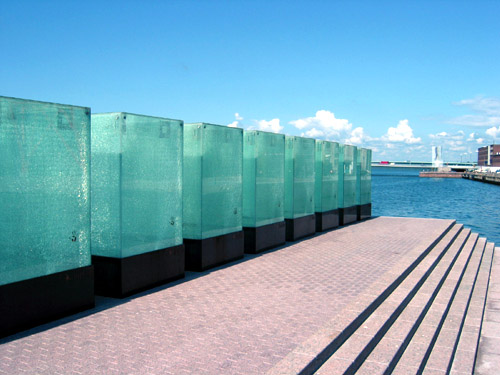 Butter, Leppänen and Jovanovic: Kide (temporary work - removed), 2002. You may not use this photo for commercial purposes. © Photo: Helsinki Art Museum