Dennis Oppenheim's Engagement comprises two diamond rings attached to each other. The rings are painted steel and the house-like diamonds are made of acrylic plates and have an electric light inside. The rings symbolize marriage while the houses symbolize the home and family. The dynamics of marriage requires that a balance be struck between two people with different backgrounds. Also, every union includes the possibility of a break up. In Oppenheim's piece, this dynamic arises from the small distance separating the rings, which lean away from each other.

Dennis Oppenheim is an American avant-gardist whose career began in the 1960s. He is known especially for his Land Art and performances, but his work includes installations and sculpture, many of which can be seen in public locations. Works from his Engagement series have also been temporarily shown in New York and Leoben in Austria. The Helsinki City Art Museum acquired Engagement in 1998. Nine metres high piece was erected in the central square in Ruoholahti by the canal and unveiled in the artist's presence on October 10, 2000. Ruoholahti is a new housing district near the city centre, built in the 1990s in a former industrial zone. 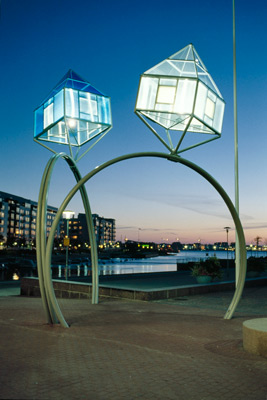 Dennis Oppenheim: Kihlaus / Engagement, 2000. You may not use this photo for commercial purposes. © Photo: Helsinki Art Museum / Hanna Rikkonen