Ernst Billgren has described the idea behind his work: "In mountainous countries, they have a tradition of building little houses at suitable intervals where tired travellers can find safety and rest for a while. The Kampintori square is like a valley in the large cityscape, and 'Meeting Places' helps people to find their orientation on a human scale. Mountain cabins are cultural ambassadors to nature, and I like to think of 'Meeting Places' as an ambassador of nature in the City of Helsinki."

Several different materials were used to make the work, including natural stone, brick, steel, copper, bronze, gold leaf, and ceramic mosaic. It also incorporates small bronze animals, two bears, a fox and a swan, as well as bronze jugs, lamps, rings, and two horns. The basic elements of the work were built to the artist's designs under the co-ordination of the Helsinki City Art Museum. Billgren brought the bronze pieces and mosaics for the work from Sweden himself. Construction plans and the building construction were undertaken by the Helsinki City Public Works Department.

'Meeting Places' was unveiled on Fredrikinkatu street by Kampintori square in attendance of the artist on 13 November, 1998. The work belongs to the collections of the Helsinki Art Museum. 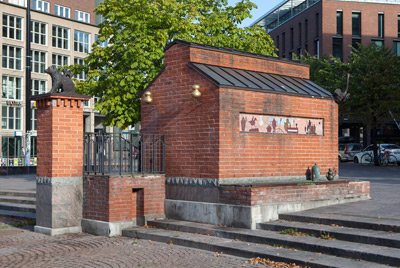 Ernst Billgren: Kohtauspaikat / Meeting Places, 1998. You may not use this photo for commercial purposes. © Photo: Helsinki Art Museum / Hanna Kukorelli