"Concerto for the Valley" by Swiss-born artist Denise Ziegler (b. 1965) is a life-size orchestra conductor's podium. Standing on the podium gives the visitor a magnificent view of several surrounding sports arenas. The work is located on the eastern side of the Finnair Stadium, on the sloping rocky outcrop between the Töölö outdoor sports centre and the Sports Museum of Finland. The base of the podium is made of Aurora granite, the railing is solid brass.

"Concerto for the Valley" shared the first prize in a competition in which chosen artists were invited to create suggestions for public artworks for the surroundings of the new football stadium in Töölö. The work was paid for from the funds of the Helsinki City Art Museum ear-marked for public artworks, and was unveiled in the presence of the artist on 14 November 2001. The work belongs to the collections of the Helsinki Art Museum.

The artist describes the work in these words: "Concerto for the Valley is an orchestra conductor's podium. The orchestra consists of the sights and sounds of the surrounding area: the curving architecture of the stadium and the ice-hockey arena, trees, old residential blocks on Urheilukatu street, PA equipment, clouds, birds, lighting, and people. Together they form a concerto, which the spectator standing on the podium can 'conduct'. The view from the highest point on the hill is magnificent both to the south and the north. One of the goals of the work was to open these vistas to the public. With Concerto for the Valley, I want to encourage passers-by to step on the podium, to listen and look around." 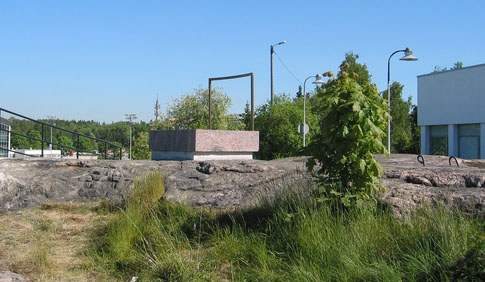 Denise Ziegler: Concerto for the Valley, 2001. You may not use this photo for commercial purposes. © Photo: Helsinki Art Museum