Although Carl Eneas Sjöstrand (1828-1906) was a Swedish-born sculptor, he is considered the founder of Finnish sculpture because of his decisive role as a promoter of Finnish public sculpture in the 1850s and 60s and as the teacher of the first generation of Finnish sculptors. Sjöstrand made numerous works with a Kalevala theme. Of the Kullervo story, he depicted the beginning and the end: in 1858 he made `Kullervo Tearing His Swaddling Clothes' in which Kullervo is only a few days old, and in 1867 `Kullervo Addresses His Sword', paid for by the women of Helsinki.

'Kullervo Addressing His Sword' is based on Kalevala's 36th poem: "Kullervo, son of Kalervo,/Drew his sword, looked at it,/Turned it over, questioning:/Would it please this iron blade/To devour guilty flesh/And to drink the criminal blood?" (translated by Eino Friberg). In the poem Kullervo ponders how to finish his violent and wretched life after he has unknowingly seduced his own sister. His decision is to throw himself on his own sword. Sjöstrand's Kullervo has two distinct bases; Classical sculpture and the Scandinavian artistic approach of the 19th century which sought its themes from Germanic mythology. Kullervo is like an athletic hero of Antiquity dressed in the clothes of a mythological figure from the North. He is wearing a bear skin, with the bear's paws hung from his belt and a faithful dog at his feet. Sjöstrand's plaster copy was cast in bronze in 1932, and the sculpture was placed in the Hesperia park form where it was finally moved to its present location in the City Conservatories in 1967, following several attacks of vandalism. 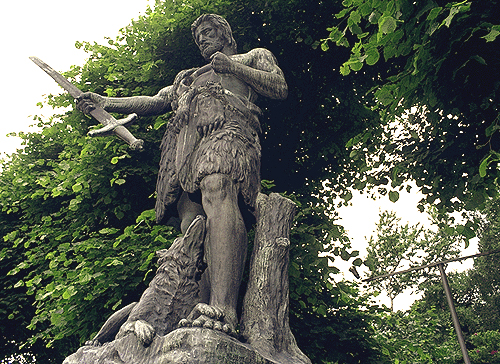 C.E. Sjöstrand: Kullervo puhuu miekalleen/ Kullervo Addresses His Sword, 1868. You may not use this photo for commercial purposes. © Photo: Helsinki Art Museum