Larin Paraske (1833-1904) was a central figure in Finnish folk poetry. The immense number of verses she could recite (over 32,000) made her one of the irreplaceable sources of Karelian culture. In fact, she is the single most important source of folk poetry in Finland. Paraske's poems include proverbs, lamentations and riddles. Her Finnish contemporaries (scientists and artists) drew enormous inspiration from her.

Alpo Sailo (1877-1955) mcreated the Larin Paraske statue in 1936 for the Kalevala building which, however, was never realized. The statue was finally erected in 1949 by Keskusosuusliike Hankkija in the Hakasalmi park off Mannerheimintie. Sailo's models for the realistic bronze statue included portraits of Paraske made during her lifetime. 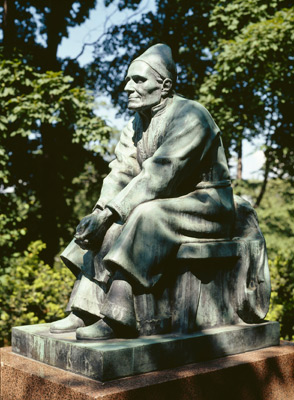 Alpo Sailo: Larin Paraske, 1949. You may not use this photo for commercial purposes. © Photo: Helsinki Art Museum / Yehia Eweis