Leo (Leopold) Mechelin (1839-1914) was one of the principal Finnish leaders during the latter years of autonomy from Russia. He was a jurist and an expert in political science, and during Russia's attempts to Russify the Finnish administration he defended Finland's rights on constitutional grounds. In 1905, Mechelin formed what is considered Finland's first political Government, the so called Mechelin's senate. Walter Runeberg cast the bronze bust in 1909 to be given as a gift to Mechelin on his 70th anniversary by the citizens of Helsinki. The bust was initially kept at the Ateneum's art museum, but in 1943 the Pro Helsinki foundation placed it in its present location in the park of the House of the Estates. The bust represents the idealistic Realism typical of Walter Runeberg.

The work belongs to the collections of the HAM Helsinki Art Museum. 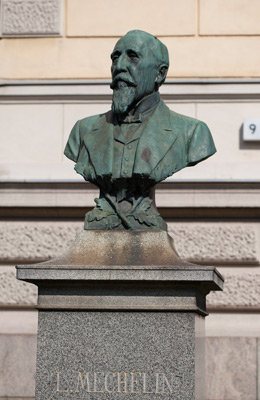 Walter Runeberg: Leo Mechelin, 1909. You may not use this photo for commercial purposes. © Photo: Helsinki Art Museum / Maija Toivanen