The large bat enclosed in a glass case along Porkkalankatu street is a reminder of the legendary Lepakkoluola that operated on the site from the 1970s up to 1999 in a former paint factory. The name Lepakkoluola ('Bat cave') was inspired by the birdlike logo of the factory. It was an innovative youth and music centre, and the birthplace of the first commercial local radio station in Finland, Radio City.

When the building was demolished, the sculpture by Jouni Kuusimäki that had hung over the door of the assembly hall since 1980 was put in storage and mounted in its current place in summer 2003. One of the organisations behind the sculpture project was the Live Music Association Elmu. The work is made of steel and its wingspan is over four metres. 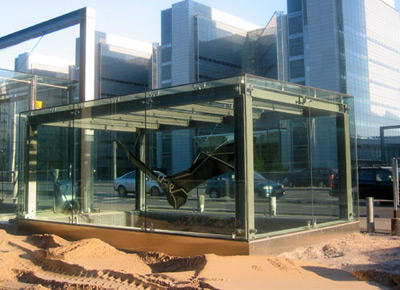 Jouni Kuusimäki: Bat / Lepakko, 2003. You may not use this photo for commercial purposes. © Photo: Helsinki Art Museum