Emil Wikström is considered one of the principal sculptors of the so called Golden Age of the turn of the century. Wikström was the first to show clear nationalistic features in his work. The granite sculptures are a part of the facade decoration of Eliel Saarinen's Railway Station. The building is considered one of the best examples of National Romanticism and carries substantial importance in 20th century Finnish architecture. The building's monumentalism derives from the use of natural stone and the application of space. The vast arched halls reflect the natural grandeur of the facades and the harmony of vertical lines, perpendicular planes and of the round, fluted towers.

The Bear in front of the National Museum designed by Gesellius, Lindgren and Saarinen is another example of cooperation between Wikström and architects. The artist's earlier work includes the tympanum of the House of the Estates.

Lantern Carriers don't belong to the collections of the Helsinki Art Museum. 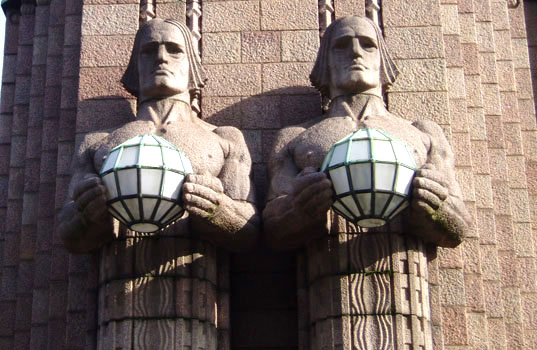 Emil Wikström: Lantern Carriers, 1914. You may not use this photo for commercial purposes. © Photo: Helsinki Art Museum