The Finnish national anthem was first sung by students on May 13, 1848, under the direction of the composer, Fredrik Pacius. On April 13, 1948, this monument was unveiled to commemorate the 100th anniversary of it's first performance.

The monument is a collaborative work by Erik Bryggman and Viktor Jansson. The monument's wall, pool and floral arrangements were designed by Erik Bryggman, an architect, whose roots were in sensuous Neo-Classicism and who combined severe Modernism with lyrical ambience. Viktor Jansson (1886-1958) is known for his numerous public sculptures characterized by architectural Classicism and created the bronze medallions, positioned on the wall.

Fredrik Pacius was a German-born composer and conductor who spent most of his life living and working in Finland. He composed the music to the poem 'Maamme' by Johan Ludvig Runeberg, which later came to be Finland's national anthem. Pacius has been called the "Father of Finnish music".

Zacharias Topelius's novels became part of the national awakening in Finland from the 1850s and was the founder of the Finnish historic novel. His works have been translated into 20 languages.

Fredrik Cygnaeus, an active promoter of Finland's national culture was also Professor of aesthetics and modern literature at the University of Helsinki. He was also a well-reputed statesman, historian, poet, chairman of the student body, art collector, and pioneer of art of art and literature criticism. 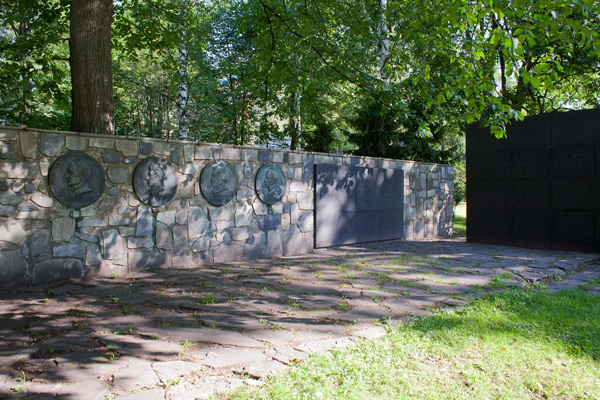 Erik Bryggman and Viktor Jansson: Monument commemorating the Finnish national anthem, 1948. You may not use this photo for commercial purposes. © Photo: Helsinki Art Museum / Hanna Kukorelli