Baron Carl Gustav Emil Mannerheim (1867-1951) was the Marshal of Finland, Protector (1918-19) and President of the Republic (1944-46). Mannerheim's achievements as a soldier and a statesman have made him one of the most influental figures of the 20th century in Finnish history. The idea of a statue of Mannerheim riding his horse was proposed already in the 1930s but the first attempts to realize the proposal never succeeded. The idea resurfaced after Mannerheim's death, and in 1952 a competition was arranged to find a sculptor. The first stage of the competition was completed in 1954. Following two further stages, the memorial statue was commissioned from Aimo Tukiainen (1917-1996).

Tukiainen made a realistic and detailed statue of the horse-riding Mannerheim. At its unveiling in 1960 the art world considered it out-dated. In his contemporary works Tukiainen himself had already moved on from realism. The statue was, nevertheless, welcomed and it has withstood the criticism of time. Throughout its history the memorial, and Mannerheim, have been the subject of extensive debate, ranging from his career and importance to his political affiliation. The features of the horse, its gait and which of the Marshal's horses it actually represents have been almost as popular themes. During his life Mannerheim owned several horses, of which at least Talisman, Neptun, Andermann and Käthy are known by name. His last horse Käthy was still alive when the first competition was announced. Although Tukiainen based the horse in the monument on Käthy, his purpose was not to portray her as such.

Recently, the decision to build (1996-) the Museum of Contemporary Art on the adjoining plot inspired a long and passionate discussion on the principles of urban planning in Helsinki, on urban improvement and on the values involved in the Marshal's statue and its surroundings. The memorial was originally financed by donations and by the public's contributions. In fact, thanks to the public, the funds were sufficient for not only the statue but also for purchasing the Louhisaari mansion in Askainen, Mannerheim's place of birth. The mansion was donated to the government and it was turned into a museum managed by the National Board of Antiquities and Historical Monuments. The work is bronze and it is 11.7 metres high together with the red granite pedestal. The work belongs to the collections of the Helsinki Art Museum.

The statue talks to you: http://suomenpresidentit.fi/mannerheim/?lang=en 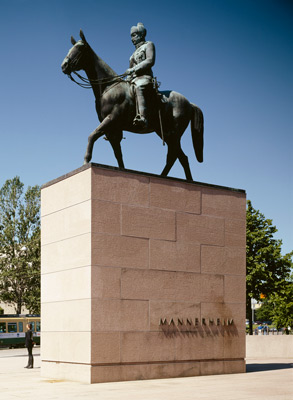