Oskari Wilho Louhivuori (1884-1953) was a professor, as well as rector and chancellor, at the Helsinki School of Economics and Business Administration. In 1917, Louhivuori was senator and chief of the senate's social affairs committee and from 1917-19, he was also a Member of Parliament. The memorial to Louhivuori is a traditional realistic bronze bust on a red granite pedestal and was unveiled on May 18, 1961.

The artist, Uno Aro, studied at Helsinki University and, in the early 1920s, at the Helsinki Art Association. He continued his studies later in Paris under Antoine Bourdell. Aro's sculptures can now be seen all over Finland including: "The Boy with a Good Posture" in Joensuu; Rauma Railway monument in Rauma; and "The Boy with a Bark Boat" in Oulu. 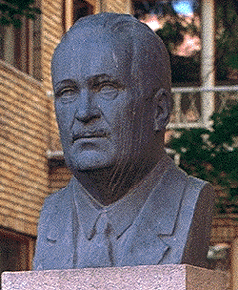 Uno Aro: O. W. Louhivuori, 1961. You may not use this photo for commercial purposes. © Photo: Helsinki Art Museum