Opera Ophidia was made by Ossi Somma, Reijo Paavilainen and Pertti Mäkinen. All three are well-known Finnish artists, each with a considerable artistic production. They have worked as a group since the late 1970s.

'Opera Ophidia' is the group's entry to the park exhibition commemorating Helsinki as one of the European Cities of Culture. The work consists of steel netting shaped like a snake and filled with rocks. 'Opera Ophidia' is derived from a work in the group's 20th anniversary exhibition in 1999, where the serpentine form was shown from above. The exhibition toured around Finland and the contents of the netting changed accordingly: in Pori, the work was filled with rocks, in Rovaniemi with ice, in Alajärvi with peat.

'Opera Ophidia' attracted a lot of attention at the Töölönlahti sculpture exhibition and, in particular, children liked it. After the exhibition, the work was left in place indefinitely, because dismantling would have meant its destruction.

The three artists participate in all stages of their projects from initial design to implementation, making the works truly collective. Other works produced by this rare collaboration include the monument to pioneers in Lapua and the monument to shipping in Oulu.

The work in Töölönlahti is still owned by the group, so it doesn't belong to the collections of the Helsinki Art Museum. 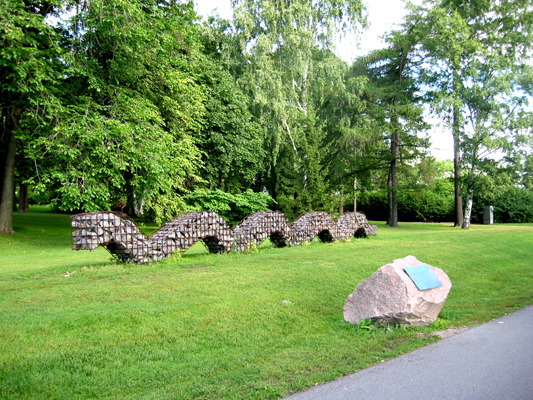 Somma, Mäkinen, and Paavilainen: Opera Ophidia, 2000. You may not use this photo for commercial purposes. © Photo: Helsinki Art Museum