In 1934, the Salus Hospital purchased a bronze dog from Emil Cedercreutz to be placed in front of the hospital building. The piece was modelled after the artist's own watchdog named Pekka, and the hospital staff took to calling the sculpture "Watchdog Pekka".

Subsequently the dog has also been called Turre. The Finnish Guide Dog Association, founded after World War II for blind veterans, donated the first guide dog they trained, called Turre, to a veteran who had lost his sight in the war. The donation attracted a lot of attention and many people mistook "Watchdog Pekka" in Kaivopuisto for a likeness of the Turre guide dog.

Baron Emil Cedercreutz was a known animal lover, and he made many pieces depicting animals. His production includes many public works on the theme of horses, such as "Maternal Love" in a park in Helsinki depicting a mare and a foal, "The Harrower" in Pori, and "The Ploughman" in Harjavalta, also known as "The Landman's Honour".

Cedercreutz was one of the first so-called sculptural impressionists who introduced everyday subjects in Finnish sculpture. He is also known for his silhouettes, which he first began making at the age of five or six. Cedercreutz also made high-society portraits. 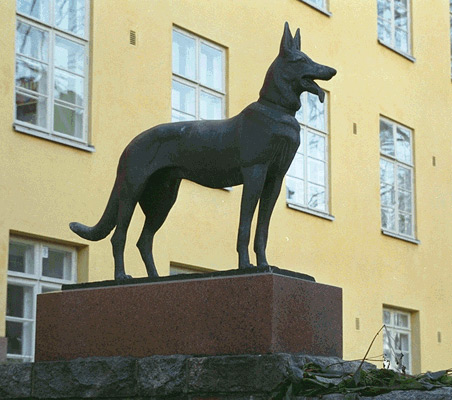 Emil Cedercreutz: Watchdog Pekka, 1934. You may not use this photo for commercial purposes. © Photo: Helsinki Art Museum