Gunnar Finne (1886-1952) is probably best known for his memorial to Z.Topelius named "Taru ja totuus" ("Fact and Fable") which illustrates the elegantly stylized Classicism adopted by the artist at its best.

Armas Lindgren (1874-1929) is one of the pioneers of the Finnish National Romantic architecture. From the very beginning he was a member of the Gesellius, Lindgren, Saarinen architectural office and participated in designing the extensive works commissioned from the company. When the firm was dissolved, Lindgren concentrated on designing the National Museum.

Gunnar Finne's and Armas Lindgren's co-operation dates back to the founding of Ornamo, the Finnish Association of Designers.

The monument to the Pellinki Battle was erected in memory of the Whites who died on the sea ice by the island of Pellinki while fleeing Helsinki in 1918. The work was commissioned by the City of Helsinki and was unveiled on May 16, 1921.

"Fact and Fable" depicts a kneeled figure of a man. At this time, the earlier trend of National Romanticism was no longer popular and, accordingly, this work was done in a more militaristic style akin to Greek sculpture. As a memorial to the Civil War, the work is one of many sculptors' efforts to satisfy the high demand for such memorial works of art which lasted until the 1930s.

The memorial is made of red granite and it belongs to the collections of the Helsinki Art Museum. 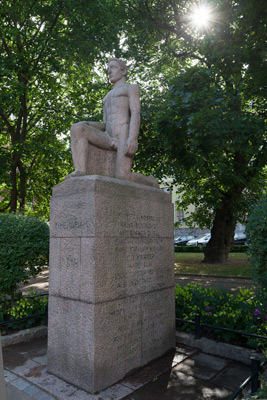 Gunnar Finne and Armas Lindgren: Battle of Pellinki Memorial, 1921. You may not use this photo for commercial purposes. © Photo: Helsinki Art Museum / Maija Toivanen