Miika Nyyssönen's Exception blends into the wall of an apartment block in Ruoholahti. It may initially seem as if there is a hole in the brick wall. Looking in, however, one sees the oval interior and its brick reliefs. Visually, the piece represents a departure from the predominantly rectangular and quadratic architecture of the area, hence the title, Exception. And just as another of Nyyssönen's works, Caveman's Cave (2005), Exception too contains a surprise.

In addition to site-specific works, Miika Nyyssönen also makes sculptures, paintings, installations and video and sound works. Exception was produced by the Helsinki Housing Production Department (Att). The work is looked after by the housing company and it doesn't belong to the collections of the Helsinki Art Museum. 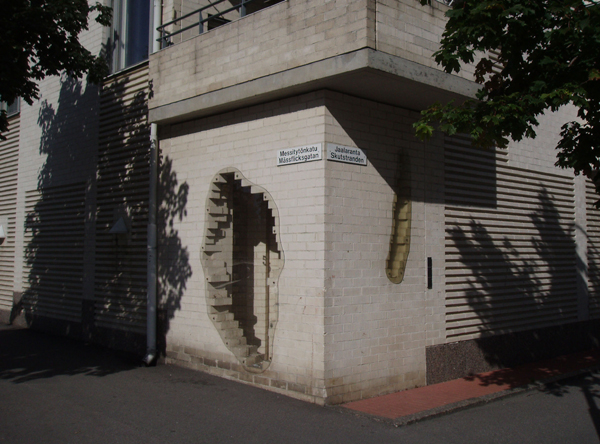 Miika Nyyssönen: Exception, 1995. You may not use this photo for commercial purposes. © Photo: Helsinki Art Museum