Veikko Myller's (b. 1951) winning entry in the competition for the Risto Ryti memorial caused considerable debate and demands were made for a new competition. The Risto Ryti -group began a drive for a new competition and collected an address of 146 signatures, including many by very influential people. By a close vote, the City's municipal board decided to back these demands. In the end, however, Veikko Myller's proposal was erected at the eastern end of the Hesperia park in its original form.

The sculpture has typical constructivist features. The aim of the constructivists was to do away with the dividing line between an artist and an engineer. They also considered the coherence of material and form important. In Veikko Myller's work form and material are reconciled with great skill. It's pure, basic geometrical forms and unfinished surface are also reminiscent of Minimalism. Simple expression and dynamic composition create an atmosphere which depicts the shoulders of an individual expressing leadership of the country during the most dramatic times in its political history. The work's surface, covered in patina, lends a weary and melancholy undercurrent which corresponds to Risto Ryti's (1889-1956) tragic fate as the winds of foreign policy changed after 1945.

Thanks to Veikko Myller's work, the suffering of the former president, who became a persona non grata (he was sentenced to prison in the war crimes trials and consequentely suffered from ill health), can never be forgotten. The work is made of bronze and was unveiled in 1994. It belongs to the collections of the Helsinki Art Museum.

The statue talks to you: http://suomenpresidentit.fi/ryti/?lang=en 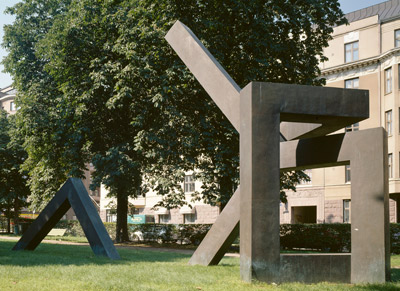 Veikko Myller: Memorial to Risto Ryti, 1994. You may not use this photo for commercial purposes. © Photo: Helsinki Art Museum / Yehia Eweis