Miina Sillanpää (1866-1952) was a journalist and one of the most influential political figures in Finland in the early 20th century. She was a member of Parliament during 1907-47, Finland's first female member of the Government as the Minister of Social Affairs in 1926-27. She paid special attention to the conditions of women who worked and took care of their children alone. She was also the chairperson of, for instance, the Ensi Kotien Liitto, a union of homes for unmarried mothers, in 1945-52. In addition, she held numerous positions of trust.

Miina Sillanpää's memorial was commissioned from Aimo Tukiainen (1917-1996) following an invitational competition arranged in 1966. The work, titled `The Torch', was unveiled on her 102th anniversary on June 4, 1968. `The Torch' in abstract bronze sculpture in whose shape a reference to a flame of light rising from a torch can be seen. It is typical of Tukiainen's work in the 1960s in which the artist studied the boundary of representative and abstract form and the visually and intellectually stimulating opportunities this frontier between visual perception and comprehension might offer.

The memorial is 5.5 metres high and its pedestal is made of granite. The pedestal contains a bas-relief of Sillanpää's profile and includes her name and dates of birth and death. The work belongs to the collections of the Helsinki Art Museum. 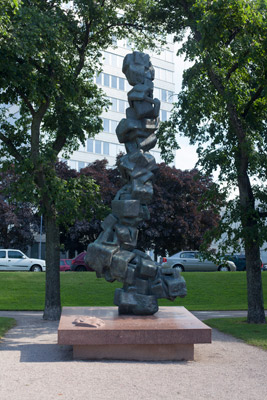 Aimo Tukiainen: The Torch (Memorial to Miina Sillanpää), 1968. You may not use this photo for commercial purposes. © Photo: Helsinki Art Museum / Maija Toivanen