Fact and Fable, Memorial to Topelius

In 1928 a competition was arranged for a memorial to Zacharias Topelius. The competition was won by Gunnar Finne's with his entry 'Fact and Fable', which was later unveiled in 1932.

'Fact and Fable' consists of two allegorical female figures: 'Fact' with the flame of truth on her palm, and 'Fable' with the crown-headed bird of fable resting on her fingers. The figures face opposite directions: 'Fact' looks down the Esplanadi park while 'Fable's' gaze is turned to the sidewalk off Pohjoisesplanadi'. The figures are formed in a way which accents non-material features, and the imagery is refined and pure. The aim has been to create an illusory atmosphere in both the maidens' figures and in the balancing composition.

'Fact and Fable' inspired much heated debate at the time of winning the competition, which was not without a political dimension involving the question of the relationship between the nation's two languages, Finnish and Swedish. Finne's proposal was a considerable disappointment to those who expected a memorial which would correspond to the realistic spirit of the author's own times. This is why Maila Talvio initiated a plan for another sculpture which sought to have Ville Vallgren's work 'Topelius as a storyteller' from 1909 cast in bronze and unveiled before the unveiling of Finne's work.

'Fact and Fable' had been commissioned by the Society of Swedish Literature in Finland but Vallgren's work was financed by donations from the public. Even schools and school children were recruited to sell postcards depicting Vallgren's works. As a result, Vallgren's piece 'Topelius and the children' was unveiled six months before 'Fact and Fable' in 1932.

'Fact and Fable' is cast in bronze and its pedestal is granite. The female figures are approximately 1.8 metres and the pedestal 1.4 metres high. The pedestal contains the text 'Zacharias Topelius' and a portrait medallion of the author.

The statue talks to you: https://patsaspuhuu.fi/topelius/?lang=en 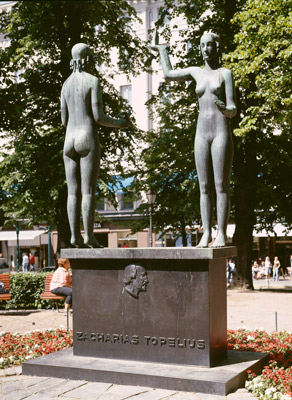 Gunnar Finne: Fact and Fable / Memorial to Topelius, 1932. You may not use this photo for commercial purposes. © Photo: Helsinki Art Museum / Yehia Eweis