During his career, Tauno Palo (1908-1982) played more than 400 roles on the stage and acted in more than 60 films. With the actress Ansa Ikonen he formed one of the most celebrated screen couples in Finland, and since the 1930s, Tauno Palo was a famed heroic actor. His work can be admired in films such as `Koskenlaskijan morsian' (The bride of the lumberjack), `Kulkurin valssi' (Gipsy waltz) and in the series of Niskavuori films.

Kain Tapper's (1930-2004) treatment of stone and wood has made him a concept in Finnish sculpture. Organic forms and Informalistic expressiveness are characteristic features of his work, which often contain a panteist ambience derived from free association and a strong bond with Nature. Tapper himself has said that in this memorial "Granite reminds of Palo's stocky figure while the roses and the water pouring down from the rock are a sign of the artist's sensibility". The memorial comprises flower arrangements, a basin, a granite slab and a bronze portrait in relief. It was completed in 1993. The work belongs to the collections of the Helsinki Art Museum. 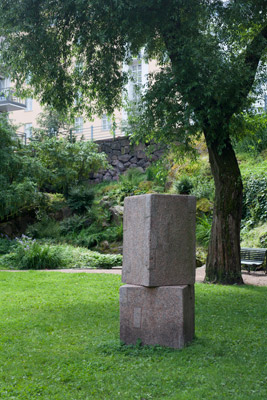 Kain Tapper: Tauno Palo memorial, 1993. You may not use this photo for commercial purposes. © Photo: Helsinki Art Museum / Maija Toivanen