Tove Jansson (1914-2001) was a Finnish Swedish-speaking novelist, painter, illustrator and comic strip author, who is principally known as the author of the Moomin books - stories for children that feature Jansson's creations, the Moomins. They are a family of trolls who are white, plump and have large snouts. The first Moomin book, The Moomins and the Great Flood, was written in 1945. Although Tove Jansson achieved world fame with her Moomin books, painting was dearest to her. She painted for example murals for locations including Aurora Children's Hospital (1955-1957) and the canteen of the Strömberg electricity factory, both situated in Helsinki.

The memorial plaque to Jansson was commissioned by the Organisation of Finlands Swedish-speaking Authors in 2005. It is situated on the wall of the building in Southern Helsinki where Jansson lived and worked from 1944 to her death, in 2001. The plaque consists of a text "Tove Jansson bodde här / asui täällä 1944-2001 Finlands Svenska Författareförening" (Tove Jansson lived here 1944-2001 Organisation of Finlands Swedish-speaking Authors). It also includes a relief of Jansson's face as a young girl. The relief is sculpted by Janssons's father, Victor Jansson, who was a famous Finnish sculptor. The plaque is made of patinated bronze and the size of it is 26 x 34 cm. It doesn't belong to the collections of the Helsinki Art Museum. 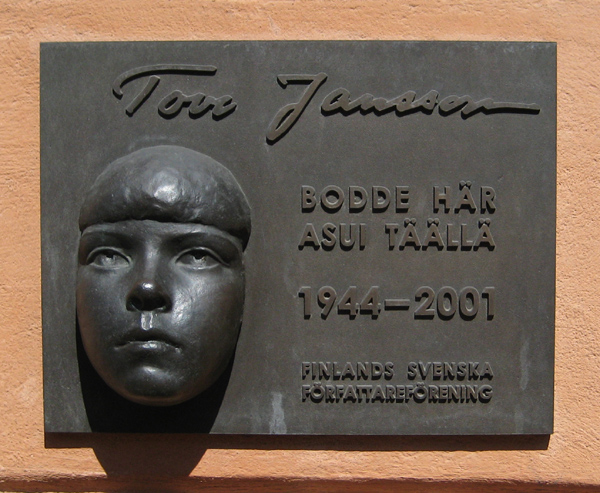 Carl Henning and Viktor Jansson: Memorial plaque to Tove Jansson, 2005. You may not use this photo for commercial purposes. © Photo: Helsinki Art Museum