Urban tree stands in front of the building housing the Department of International Development Cooperation of the Ministry of Foreign Affairs in Katajanokka. It is part of the Stop and Look! urban art project organized by the City of Culture Foundation Helsinki and the State Committee for the Purchase of Art Works. The project itself formed a part of the programme of Helsinki's year as a European City of Culture in 2000.

The artist Markku Kosonen explains his piece as follows: "A natural tree, a linden, grows on the terrace between the Stora Enso headquarters and the Department of International Development Cooperation. It is accompanied by a four-metre-high colourful tree-like figure consisting of a reinforced concrete stump in which various wooden and metallic parts have been placed in a symmetrical pattern. Their meaning is open to interpretation and they evoke diverse ideas in the minds of those that see them. As the name suggests, Urban tree implies an increasingly urban concept of forest and trees. It is an ideal solution to a common problem often seen in photographs published in newspapers where a tree blocks the way. This tree will never rot or fall down. It will never grow too big but will always stay in the same proportion to the buildings around it. It does not litter with dead leaves or make tram tracks slippery in the autumn. Birds will not peck it or nest in it and it will not change with the seasons. Winter or summer, it will look just the same. Safe, unchanging, controlled!"

Artist Markku Kosonen earned a diploma in interior design in 1968, having earlier worked as a carpenter. He has won awards for promoting wood culture and artisan design. 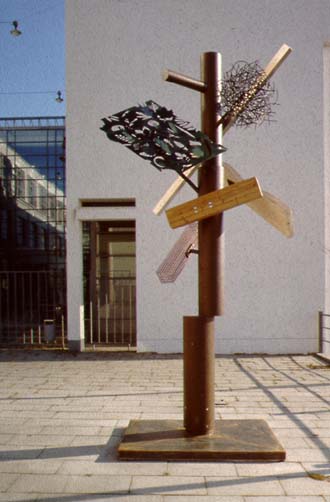 Markku Kosonen: Urban tree, 2000. You may not use this photo for commercial purposes. © Photo: Helsinki Art Museum