In the 20th century, the majority of Finnish sculptors have followed the ideals of Realism. Their work is typified by a lucidity of form and matter-of-factness, combined with deep soulfulness. In Maija Nuotio's work, two naturalistically shaped women splash water on each other in pool of water. The facing figures, almost mirror images, are twisted into postures reminiscent of wrestling, and the viewer stops to see which of the two will start the match.

The work was erected in 1982. Its material is bronze. The work doesn't belong to the collections of the Helsinki Art Museum. 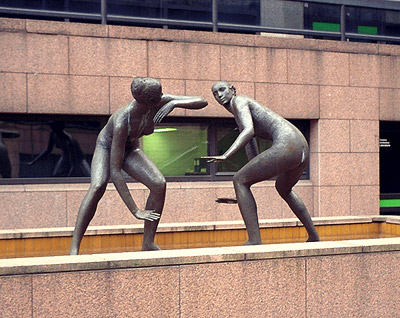 Maija Nuotio: Water Game, 1982. You may not use this photo for commercial purposes. © Photo: Helsinki Art Museum